We adjusted some of our games for English speakers and we welcome anyone who wants to have some intelligent fun! 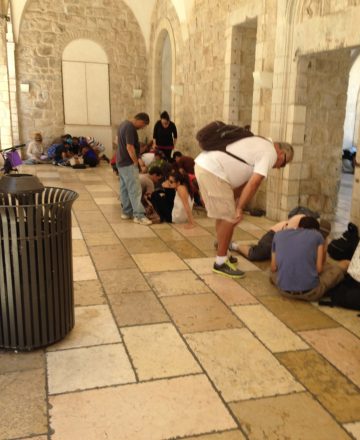 A new quest was born in the charming Judge valley nature reserve.

At 2013 we introduced a big team's race starting from the center of Tel-aviv and reaching Old Jaffa.

Since then we created a big group game in Lahav Forest & another one in the lovely settlement of Bethlehem of Galilee.

The treasure hunt in the caves of Bet Guvrin was translated and fitted for English speakers.

At 2019 we created a rolling game from Carlton Hotel in Tel-Aviv to a restaurant in Caesarea for 40 Bar-Mitzva guests including special games and riddles of the family.

Nivuteva games are original combinations of moving and thinking.

The games are fit for groups of employees, youth or families. Each person of

the team contributes to its success with his (or her) strong abilities.

Nivuteva can provide these games in few days’ alert:

# The mysteries of Bethlehem of Galilee

# Back inside the old-city walls in Jerusalem

# Jerusalem of Light – a game in Yemin Moshe

# Many activities in the forests & parks

What were our English speaking clients doing?

Those (English) challenges were already tried and enjoyed by these groups:

The international employees of Ex Libris enjoyed the Jerusalem Race.

Employees of CellWise and Empower Africa walked & raced in The Neve Tzedek adventure.

International marketers of SodaStream & NuMark Innovations toured Old Jaffa in Nivuteva game and the exhibition experts of Barzilai did the same.

The management team of playbuzz enjoyed in a small ODT happening in the Arboretum.

An international development team of Teva walked Back inside the old-city walls in Jerusalem.

All the guests and employees of Gilat in a multi-task race in the Lahav Forest.

The international sales teams of Pontis, the employees of SDGM and a team of PMC were challenged by Old Jaffa adventure.

Groups of managers from Cisco, Panaya & Gigaspaces navigated and solved riddles in old Jaffa Marketing managers of  Netafim from all over the world engaged the Jerusalem game.

Some groups of English Zionist kids learned Orienteering in Ben Shemen and Tzor'a forests with us.

The employees and guests of cVidya did the Neve-Zedek Observation game by night!

A group of the young leadership of the Bonds and a section of Payoneer employees competed in The Hidden Origins of Tel Aviv game. The same game attracted 2 groups of Ironi Dalet high school and their guests from LA and Bonn high-schools.

The international salesmen of Flash Networks concluded their annual meeting entering the challenge of The hidden Origims of Tel-Aviv.

The international management team of Maytronics investigated the mysteries of Bet Guvrin – Maresha national park. A team of more than 20 employees of Nice played some ODT games and navigated in Ra'anana Park. The employees of FINN Partners did the same at Ben-Shemen Forest.

A golden wedding outdoors event in Haruvit Forest for a celebrating family from England and Israel.

About a thousand other group events were held in Hebrew and we also translated several games to Russian.

A letter from Rafi Heiman of Gilat after their event says it all:

Dear Boaz and Chen,
Thank you very much for the orienteering event you have organized for the Gilat team in Ya'ar Lahav, on January 15th. It has been both fun and challenging, to the full satisfaction and joy of all participants, both our Israeli employees, and our sales people from all over the world. In particular, the international contents of the various tasks in the control points, made everybody feel "at home". Please forward our warm thanks to the whole Nivuteva team.

A message from an organiser of israeli+american youth event.

"Thank you so much for yesterday! I know the kids didn’t complete the race but they had such a good time and bonded. It’s a wonderful program and they gain so much from walking the streets and figuring out the clues ." Racheli – teacher from L.A. after a game in Neve Zedek (Tel Aviv) at December 2019."

"Thank you for running our company team building session yesterday. Everything was well organized and professionally run. Everybody had a great time" – Nadine Cohen of Empower Africa after a social happening in Neve Tzedek at Sept' 2020 according to Corona regulations.

What shall we do for you?